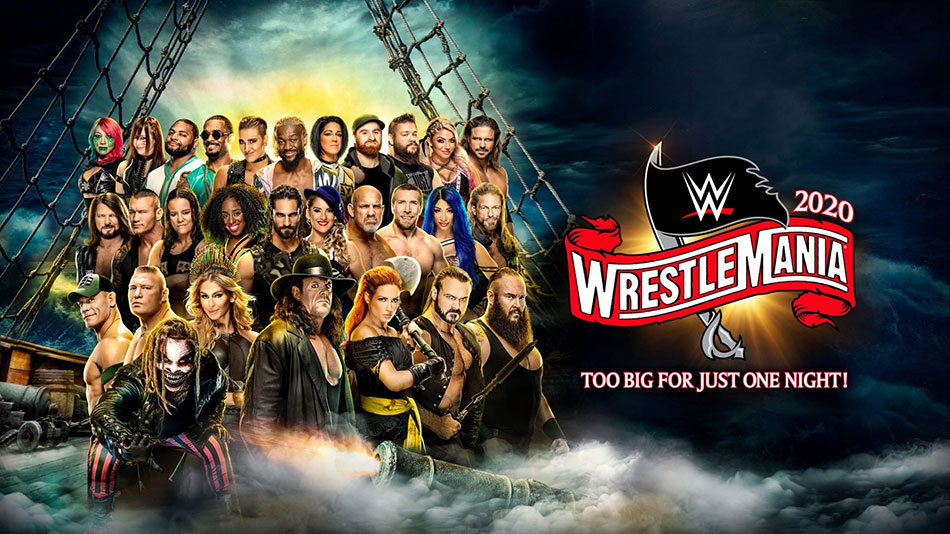 The Grand-daddy of them all. The pinnacle of Sports Entertainment. The Showcase of the Immortals. The Show of Shows. The Grandest Stage. WrestleMania has been, for thirty-six years, the height of pro-wrestling and sports-entertainment, it’s that one time of year that fans of wrestling are excited for, even those who perhaps don’t watch it as much as they once did. It’s bright, vivid, exciting, wild and gigantic, and yet this year, for the thirty-sixth incarnation of the event that began all the way back in 1985, things had to be scaled-back due to the COVID19 pandemic that has devastated the globe.

When things are bad and difficult and scary, you can bet that pro-wrestling and specifically WWE will be there to entertain you. That’s what WWE did here with WrestleMania 36, in April of 2020. Taking place at the WWE Performance Centre in Orlando, Florida, rather than the planned location of the Raymond James Stadium in Tampa, the show took place with no fans in attendance, and was aired over two nights. This was only mere weeks after the world began shutting down and altering how things were done due to the virus situation. WWE took the bull by the horns and changed their plans on a dime, going to their in-house centre and giving the wrestling world and all the fans something to focus on, something to enjoy at a time when things were scary, confusing and bizarre. It was an example of that old adage “The Show Must Go On”.

The event, which took place on the 4th and 5th of April, is jammed with entertaining and big matches featuring the best of WWE. It is, without a doubt, a great show and really, with everything that was going on, it could have failed to be. It doesn’t fail. Things kick-off on Night 1 with an entertaining and high-energy clash over the WWE Women’s Tag Team Titles with Champions Asuka & Kairi Sane defending against challengers Nikki Cross & Alexa Bliss. A fifteen minute battle, it’s a perfectly toned feel-good opening to WrestleMania.

Following a quick-fire grudge bout between King Corbin and Elias, we were treated to the much anticipated RAW Women’s Title match between “The Man” Becky Lynch and former NXT Women’s Champion, “The Queen of Spades” Shayna Baszler. A forceful, impactful and engaging battle between two of the most talented women in the company, this was a nice match with an unexpected conclusion. Daniel Bryan went into battle with the Intercontinental Champion Sami Zayn in a fun match next, which highlighted just how good Zayn is as a villain, and how great Daniel Bryan is at, well… everything. While it didn’t perhaps last as long as many would have liked, this was still entertaining stuff.

For eighteen minutes we saw Kofi Kingston, John Morrison and Jimmy Uso battle in a ladder match for the Smackdown Tag Championships. With their partners not in the match, this triple-threat felt unique, and featured some wild brawling, high-impact high spots and moments of great wrestling. It was everything you could want in a ladder match at WrestleMania, and one of the most entertaining matches of the whole weekend. This fantastic match was followed by one that was just as good, perhaps a little better, as Seth Rollins took on Kevin Owens in a match built on their rivalry which had dominated RAW for some time prior. These two guys have great chemistry together in the ring, and this match, which saw them wrestle their hearts out for almost eighteen minutes, was no different. As far as in-ring matches go, this was the height of Night 1. Fantastic.

A short Universal Title match between Goldberg and last-minute challenger Braun Strowman was next, before the first night of WrestleMania 36 closed with one of the most peculiar, engaging and exciting main events in recent memory. A cinematic clash between “The Phenom” The Undertaker, and “The Phenomenal” AJ Styles. This twenty-five minute brawl was completely out of nowhere, something completely new for WWE that got everybody talking. A “Boneyard Match”, this took place in the dirt of a graveyard, as the two brawled, beat each other senseless and kicked each other around and into cars, graves, wooden shacks and caskets. They hit each other with shovels, tossed each other off roofs, and threw everything but the kitchen sink at one another. It was a blast, and a perfect way to end the first part of the show. It made people smile at a time when this was most important, and that’s awesome.

Night Two begins with a twenty-minute clash between the NXT Women’s Champion, Rhea Ripley, and the Royal Rumble winning challenger, Charlotte Flair. This was a full-on fight between these two great athletes, and another strong opening to another night on “The Grandest Stage”. Two singles grudge matches followed, with Aleister Black and Bobby Lashley wrestling and Otis taking on Dolph Ziggler in a match that was built for months during the Otis/Mandy Rose saga. These were enjoyable, with the Otis/Ziggler match having that much-desired heartwarming moment many fans hoped for. Another warm hug from WWE. Thanks guys!

Edge made his return to WrestleMania next in only his second match back after a nine-year absence, against Randy Orton. This thirty-five minute brawl around the bowels of the Performance Centre was a slow-building fight that was both entertaining and had an old-school backstage brawl feel to it. Some say it went a touch too long, but I thoroughly enjoyed this match and have loved revisiting it since. The fact that Edge, thought retired due to injury for almost a decade, could come back and work the longest match of a two-night WrestleMania, is pretty incredible. A short match for the RAW Tag Belts followed with The Street Profits defending against Angel Garza and Austin Theory. We then went on to the five-way match for the Smackdown Women’s Title, with Champion Bayley defending against Lacey Evans, Tamina, Sasha Banks and Naomi. This was another entertaining twenty-minute bout that built further towards that anticipated Sasha/Bayley feud.

The next match saw, for eighteen strange and obscure minutes, John Cena step into The Firefly Funhouse for a Firefly Funhouse Match. This was the second and final cinematic match of WrestleMania 36, following The Boneyard Match the night before. This was comical, weird, funny, crazy and incredibly enjoyable, with Cena, Bray Wyatt and The Fiend telling a story that was trending worldwide for days afterwards. The final match of WrestleMania 36 saw the winner of the 2020 Royal Rumble, Drew McIntyre, take on the WWE Champion, Brock Lesnar. This went a mere four minutes, but was intense and heart-pumping, ending the weekend in a big way.

A fantastic event, the Blu-ray release features a whole bunch of extra features, including the two Kick-Off matches with Drew Gulak facing Cesaro in a really good mat-wrestling contest, and Liv Morgan taking on Natayla from the second night. There are also a great big bunch of segments and moments from RAW, Smackdown and NXT that led to the show, such as contract signings, brawls and promos. It all works really well, because it helps give a little more context to the matches on the main show.

This is a great release of a show that was incredibly important and very memorable, featuring some fantastic matches from the best of the best in WWE. If you saw this show and want to revisit it, then this is a good way to do that, and if you’re yet to watch it… well, I recommend doing so. This will be looked back on as one of the truly vital events in WWE’s history. 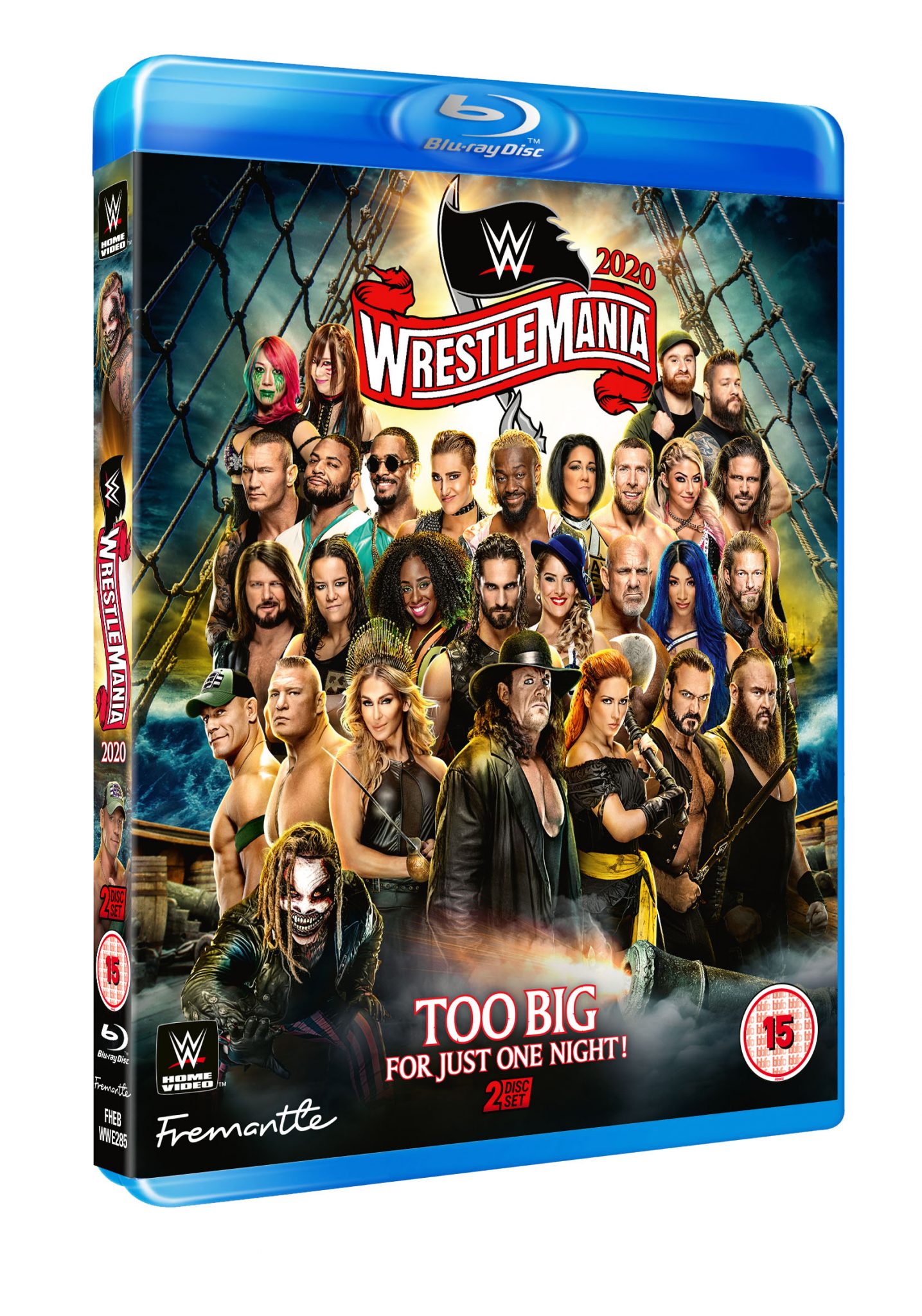 The Showcase of the Immortals transforms into a two-night sports-entertainment spectacle for the ages! It’s The Claymore vs. The Beast when DREW McINTYRE gets his opportunity at immortality against BROCK LESNAR for the WWE Championship. WWE’s most indestructible forces come to a collision course as GOLDBERG defends the Universal Championship against BRAUN STROWMAN. SHAYNA BASZLER gets a challenge she can sink her teeth into when she collides with RAW Women’s Champion Becky Lynch. Yowie Wowie! JOHN CENA steps into the twisted mind of BRAY WYATT in the first-ever Firefly Fun House Match. ‘THE PHENOMENAL’ AJ STYLES crossed paths with UNDERTAKER in a Boneyard Match. In a bout never seen before, CHARLOTTE FLAIR goes head-to-head with RHEA RIPLEY for the NXT Women’s Championship. For the first time in over a decade, EDGE returns from retirement to The Grandest Stage of Them All to take on former partner become rival RANDY ORTON in a Last Man Standing Match. Plus, more! Welcome to WrestleMania!