Owen Hart was always one of my go-to wrestlers to watch back in the 90s. He was, in many ways, ahead of his time when it came to his technical skills in the ring. He was, at a time when work-rate wasn’t at it’s heights, one of the best workers in the world. When I began watching pro-wrestling Owen was competing as “The Rocket” but it wasn’t until he turned heel and became the snivelling bad-guy “King of Harts” character in 1994 that I truly saw just how incredible Owen could be. He was, from then on, one of my all-time favourites.

Tragically, in May of 1999, Owen passed away after a tragic accident during a Pay Per View event in Kansas City. It was an awful thing, something that can still be felt today in wrestling. After it happened, Owen wasn’t mentioned much in WWE due to the legal battle between Owen’s widow Martha and WWE themselves. It was a wonderful thing for fans, then, when it was announced that this release on Owen Hart would finally be put out. As a big fan of The Hart Family and what they’ve all given to the world of pro-wrestling, and of Owen, it was a big deal to see WWE release Owen: Hart of Gold back in 2015.

This 2-disc blu-ray release is tremendous and a must-see for fans of Owen, fans of the Hart’s, and fans of wrestling history. The best and most important part of this release is the documentary portion which takes us along the career and life of Owen Hart, from his youth and being part of the most famous wrestling family of all time, his beginning in Stampede Wrestling in Canada, to his WWE debut, his career in the company from Blue Blazer to Rocket to King to Slammy Award Winner to Foundation Member to Blazer again. It talks about the loss of Owen too, and the incredible legacy he left behind. It’s a beautiful documentary, both funny and heartbreaking, entertaining and full of great stories. I had a blast with it, and left it wondering just what we might have been able to see had Owen not passed away in 1999.

We also get a bunch of extra stories about Owen and his life here, plus a bunch of fantastic matches ranging from Stampede in 1982 to 1998 in WWE. Some of my favourite Owen Hart matches are present here, such as his absolute classic with his brother Bret at WrestleMania X, his unbelievable European Title Final against his brother-in-law Davey Boy Smith and the awesome 10-Man Tag match from Canadian Stampede which saw Owen team with his Hart Foundation brothers, Bret, Davey, Jim Neidhart and Brian Pillman to take on Steve Austin, Goldust, Road Warriors and Ken Shamrock. These are just a handful though, because there’s a bunch more, plus some nice extra ones on the blu-ray release itself. The blu-ray release also has a large selection of the tribute videos from the Raw is Owen tribute-show from the night after he died back in May 99. These are hard-to-watch memorials from his peers which I remember watching back when they happened, and it’s quite a tough thing to watch, even all these years on.

This really is a fantastic release from WWE. It does a great job at highlighting the career and life of Owen Hart without stepping on toes. The match selection is excellent and the extra features on both the DVD and the blu-ray release are top notch. This is, without a doubt, one of my favourite releases from WWE and deserved one big ole Owen Hart woo. Woo! 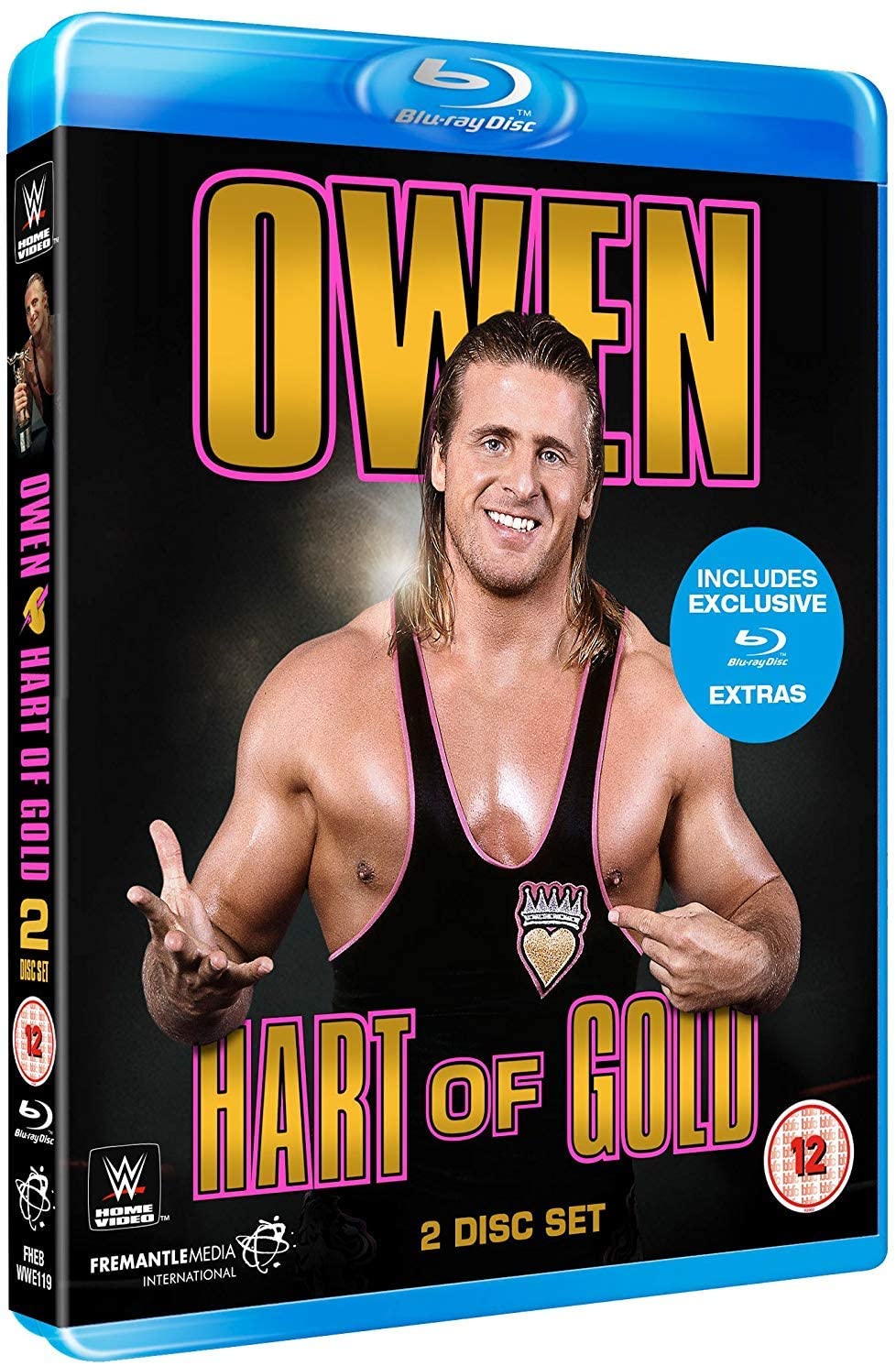 The youngest of 12 from the famous Hart wrestling family, and one of the most loveable personalities in all of sports entertainment, Owen Hart was a champion who won the hearts of fans around the world with his athleticism and one of a kind personality. For the first time ever, relive his greatest matches and hear from his brothers, sisters, friends and colleagues as they fondly look back on the life and career of a WWE Superstar with a true heart of gold.