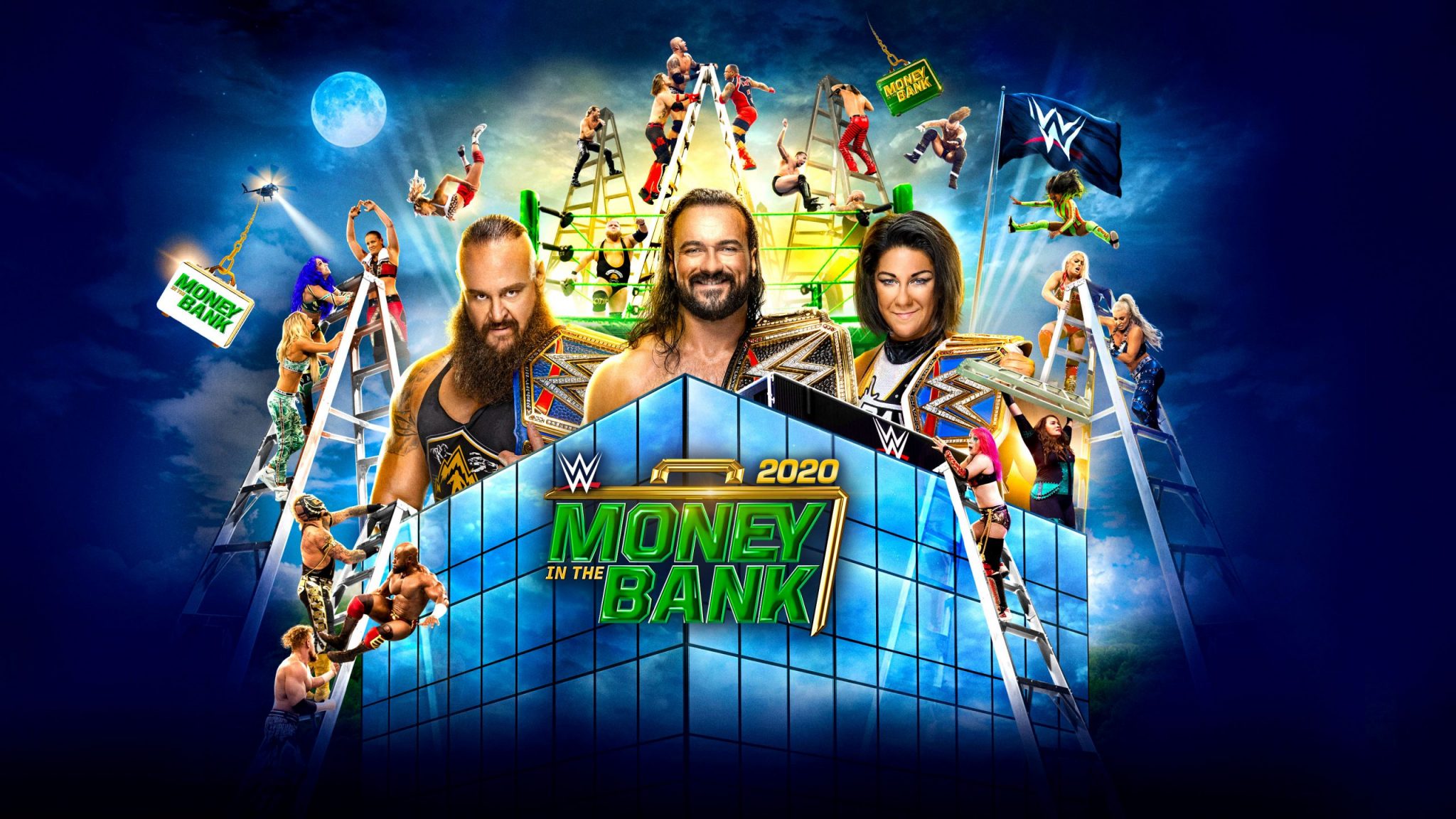 I am a fan of WWE’s Money in the Bank concept and have been since its inception. The idea of a whole bunch of WWE Superstars battling in a big ole ladder match to climb their way to potential glory in the form of a briefcase containing a guaranteed Championship opportunity is great fun, and a fantastic way to shine a light on someone new. The idea has always had, and still has, so much potential, and it regularly results in some incredibly exciting and memorable moments. I mean, look at Edge becoming WWE Champion for the first time after “cashing-in” on John Cena, or Seth Rollins with the “heist of the century” at WrestleMania 31 when he traded his Money in the Bank briefcase for his first WWE Title. There are so many of these examples and that’s why this is a show I look forward to annually.

In 2020, Money in the Bank was bound to be different due to the COVID-19 crisis, but little did fans know just how different it would be. It was announced, prior to the show, that both the Women’s and Men’s Money in the Bank matches would take place in WWE Headquarters, with all competitors having to fight their way up “the corporate ladder” and make their way from the ground floor to the very top in order to claim their prize. It was unusual, intriguing and potentially very entertaining.

The show, beyond these two matches (that were actually one big match), had plenty more going on too. The Pay Per View began with a Four-Way Tag Team match for the Smackdown Tag Titles as The New Day (Kofi and Big E) defended their Championships against The Miz & John Morrison, The Forgotten Sons and Lucha House Party. It was a fun and frantic match that lasted twelve enjoyable minutes and a cool start to the show. The second bout saw Bobby Lashley and R-Truth battle in what was a very short match which I can’t, to be honest, tell you all that much about. This was followed by Tamina, a long-time WWE talent, getting a chance at the Smackdown Women’s Title, as she faced Bayley. This was a decent scrap between two veterans and it was nice to see Tamina given a shot after so long.

The next match saw Bray Wyatt attempt to take the Universal Championship from Braun Strowman in a match that was created to help build up to a big showdown between Strowman and The Fiend. It was a fun storyline-based match that showed how dominant Strowman can be, and how great Bray Wyatt is as a character. WWE Champion Drew McIntyre defended his title against Seth Rollins next in a very good encounter that was, up until this point, Drew’s best match as Champion. It was a back-and-forth twenty-minute brawl that saw both men throw all they had at each other. Very good.

The final match(es) saw both the Men’s and Women’s Money in the Bank matches take place simultaneously. Asuka, Dana Brooke, Carmella, Nia Jax, Shayna Baszler and Lacey Evans competed across, up and around WWE’s Global Headquarters in Stamford for their briefcase, while Aleister Black, Daniel Bryan, Otis, AJ Styles, King Corbin and Rey Mysterio clashed for the Men’s case. It was a silly, entertaining, weird, unique, crazy cinematic battle that saw a lot going on, from random appearances from WWE names from the past, to dives, brawls and fights all over the offices of WWE’s tower. This was a really different and creative way to do the Money in the Bank concept this year, and it got a lot of people talking in the process. WWE really do know how to make the best of a bad situation, and this, like most of what we’ve seen in 2020, is proof of that.

This DVD also features the Kick-Off Show match between Cesaro and Jeff Hardy that went almost fifteen minutes and was really good. It’s a show that features some really good matches and a memorable and obscure main event that is unlike anything we’ve seen before in WWE. A worthwhile watch for a number of reasons, then, Money in the Bank 2020 has a lot to say, and says most of it well. 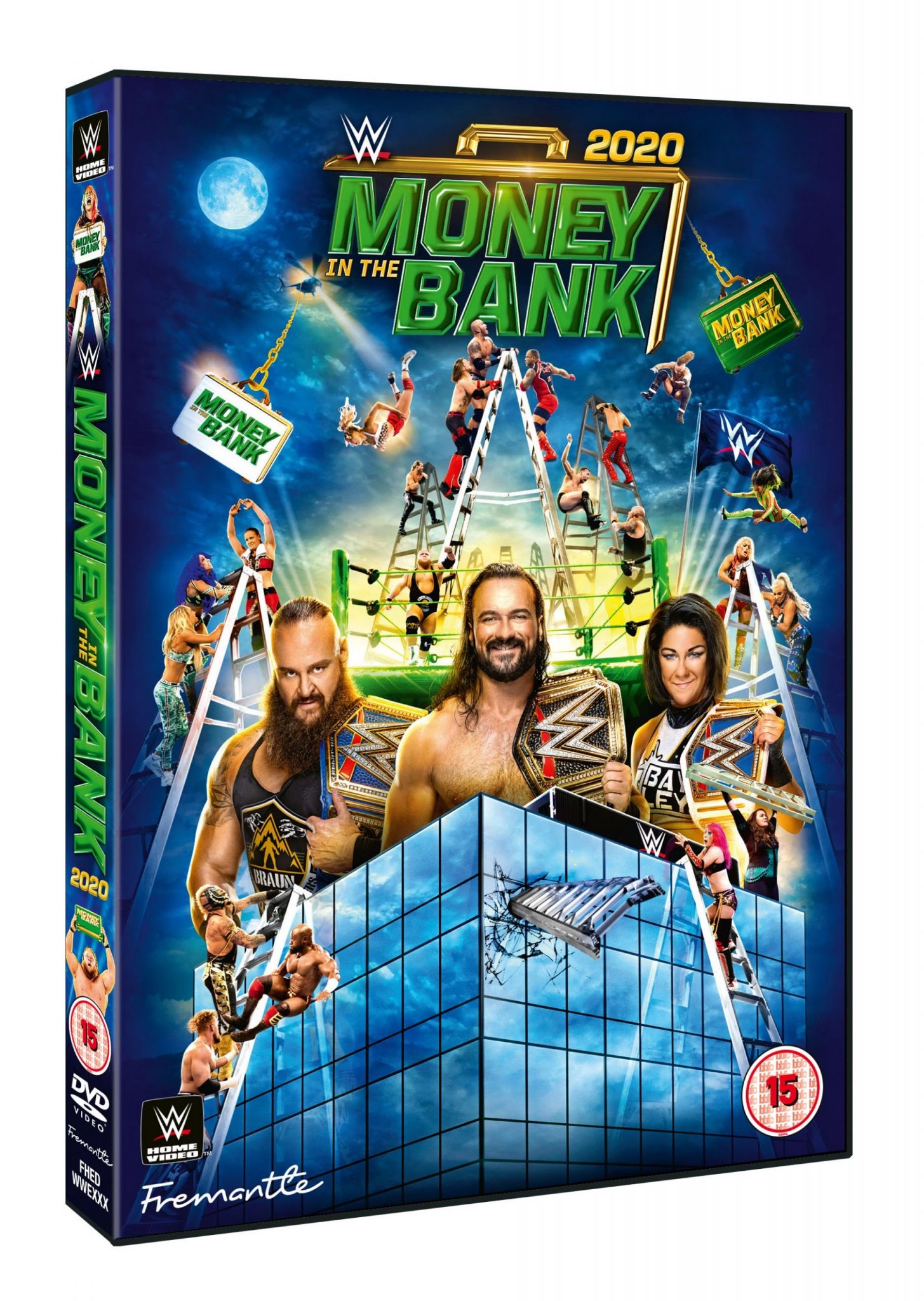 For the first time ever, WWE’s corporate headquarters will be the site of the most unique Money in the Bank matches yet!

The dark past of Braun Strowman comes to collect as Bray Wyatt challenges The Monster Among Men for his Universal Championship. Bayley puts her historic SmackDown Women’s Championship reign on the line against the Samoan powerhouse, Tamina. Drew McIntyre defends the WWE Championship against the holier-than-thou challenger, Seth Rollins. Plus more!

The risk is worth the reward at Money in the Bank!