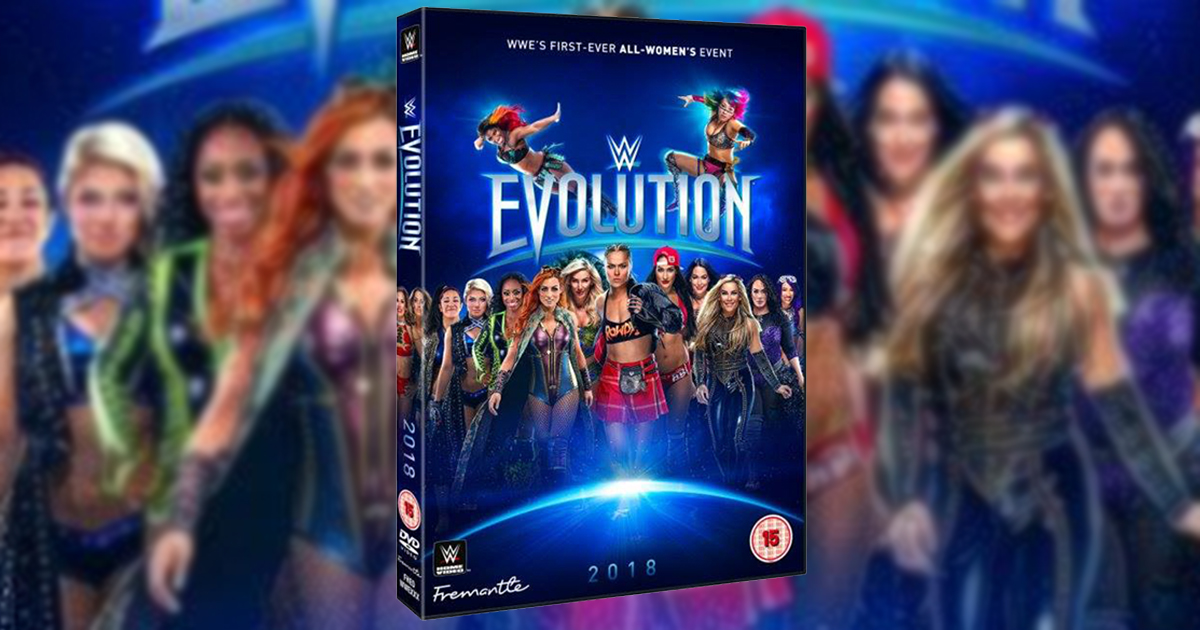 I’ve been a fan of women’s wrestling for the longest time. It’s a blast to see the women of today taking the bull by the horns, grabbing that metaphorical and infamous “brass-ring” and creating a buzz in pro-wrestling by stealing many shows with their talent. A lot led to this show, the first-ever all-women’s WWE pay-per-view. Many women came before, in the decades gone by, to create a tapestry that eventually saw this show being booked.

It was a beautiful day when WWE announced Evolution, and an even better day when the event itself went live. This was one of my favourite wrestling shows of 2018. From the opening bell to the closing scenes, Evolution went far in proving not just how capable the women of WWE were of carrying a whole pay-per-view, but exceeding all expectations with ease, showing their skills, entertaining the live crowd and those watching on the WWE Network, and leaving another legacy behind to look back on.

Opening with a match that saw WWE Hall of Famers Trish Stratus and Lita teaming-up to take on the team of Mickie James and Alicia Fox. This was a pretty quick crowd-pleaser that was created to give a hit of nostalgia to the fans. Two of the most-popular women from WWE’s vast history books, against two current-roster WWE veterans. This was an enjoyable and throwback encounter that the crowd ate up and felt like a fun and charming beginning to the show. It was, though, going to get so much better from here on out.

A 20-woman Battle Royal followed, with a variety of women, from the past and present. The match featured Nia Jax, Ember Moon, The IIconics, Molly Holly, Kelly Kelly, Torrie Wilson, Tamina, Zelina Vega, Carmella, Dana Brooke, Sonya Deville, Alundra Blayze, Lana, Mandy Rose, Maria, Michelle McCool and Naomi. It was a fun Battle Royal that gave the women on the roster not announced for other matches, as well as women from the important past of WWE’s women’s division, a chance to shine on the show. Lovely.

The next match was the culmination of the excellent 2018 Mae Young Classic tournament, with finalists Io Shirai and Toni Storm fighting for the honour of being crowned Mae Young Classic Winner 2018. I have followed both Mae Young Classic tournaments to date and thoroughly enjoyed both, and this final was a brilliant cherry on the top of the cake of what was a splendid showcase of women’s wrestling from around the globe. Australia’s Storm and Japan’s Shirai tore the house down here, with some exceptional exchanges and hot flurries of action. The crowd, many of whom may not have known these two women, reaction very well to the match. This was one of my favourite matches of the whole show, and a nice way to show just how bright the future of women’s wrestling in WWE truly is.

The next match was a crowd-pleasing six-woman tag-team affair, pitting the team of Sasha Banks, Bayley and Natalya against the well-oiled trio of Sarah Logan, Liv Morgan and Ruby Riott (The Riott Squad). Featuring fun tag team psychology, entertaining exchanges between all six woman, and signature spots that each woman has become known for, it was a solid yet short match that gave six very talented wrestlers a platform.

Another tremendous match was up next with the NXT Women’s Championship on the line, as champion Shayna Baszler facing off with her challenger, the popular underdog, “The Pirate Princess” Kairi Sane. Those familiar with the wonderful NXT product will have already been excited for this match, with the feud reaching a boiling point prior to Evolution. The two women here have real chemistry and the classic tale of the never-give-up fighting challenger who is trying to overcome the odds against the violent bad-guy who will stop at nothing to retain her title, worked beautifully. Shayna is absolutely incredible as the heel champion, snapping joints and cheating her way to victory if need-be. Kairi is great in her role too, giving the fans a talented wrestler to get behind. They didn’t disappoint in any sense here, providing us fans with another match on this show that could easily be counted as the best of the night. Just beautiful.

The insanely popular Smackdown Women’s Champion Becky Lynch took on the challenger Charlotte Flair next. I have to say, if there are two women with better chemistry in today’s wrestling landscape than Charlotte and Becky, then I’d like to see them, because these two women have a special bond in the ring that doesn’t come around often. They have had so many fantastic matches with one another over the years, and this might just go down, to date, as one of their very best. A Last Woman Standing encounter, Becky and Charlotte hit each other with tables, chairs, ladders, kicks, punches, slams and bombs, and created a story of a match that will go down, in this writers view, as one of the very best women’s matches in WWE history. Unmissable.

The main event had a tough job, following some unbelievable matches, as we saw Nikki Bella, with her sister Brie at ringside, take on the Raw Women’s Champion, Ronda Rousey. The fanfare that followed Rousey from UFC into WWE was well documented and the fans reacted well to her here. Nikki Bella and Brie played the bad-girls, the mean spirited challengers who wanted to put an end to the hype of Rousey. I have thought for some time just how little acknowledgement The Bellas get for their input into the lore of WWE. They have created some good matches over the years and been involved in some very entertaining storylines, and I feel like they deserve better in many instances. Ronda and Nikki did a very good job at closing the show here, with the two of them scrapping and clawing to come out on top. Brie got involved to try to help her sister pick up victory, at times, and Ronda did all she could to battle the adversity she found herself in front of. It was a traditional bad-versus-good encounter, and I had a blast with it. The crowd loved it.

Evolution was a terrific event. It hit on way way more occasions than it missed and it let the world know that the women that have fought tooth and nail in the years before this event did a massive amount to get women’s wrestling on the map. It let the world know that the modern day of women’s wrestling is full to the brim with exciting, charismatic, talented and creative wrestlers who will bring the fight every day and night, and it showed us, without any doubt, just how much we have to look forward to in the future too. I hope we see a second, third, forth and continuation of all-women’s pay-per-views in WWE, because Evolution was a smash-hit that will be fondly remembered forever, and for good reason.

If You Dream It, It Can Happen. At WWE’s first-ever all-women’s event, Ronda Rousey defends her championship against one of the longest reigning champions in history, Nikki Bella. Becky Lynch and Charlotte Flair battle it out for the SmackDown Women’s Championship in the inaugural Last Woman Standing Match. Trish Stratus and Lita return to the ring to face off against Mickie James and Alicia Fox in tag team competition. Plus, more! The female Superstars of Raw, SmackDown, and NXT make history!