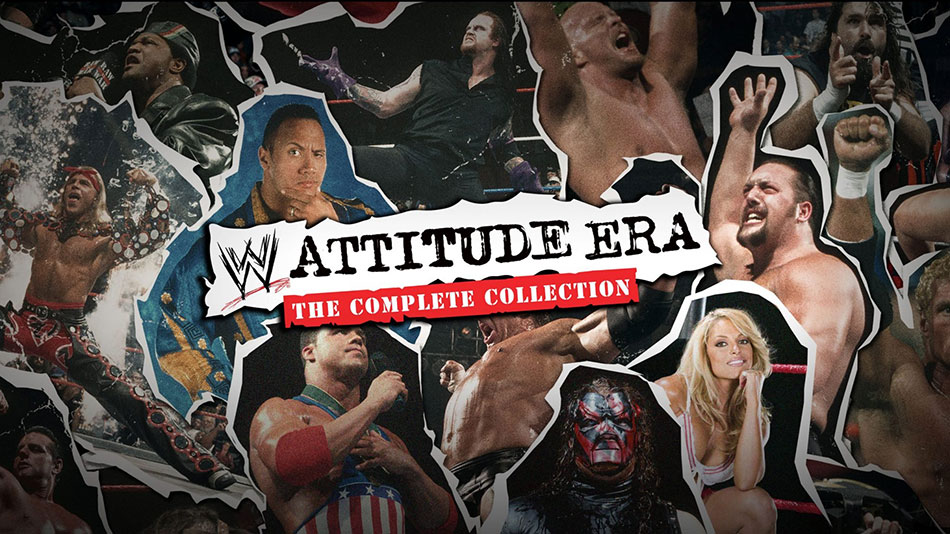 I grew up a fan of pro-wrestling in the 90s, and lived through The Attitude Era while in my teens. I was the demographic, I was the kid in the Austin 3:16 shirt waving my foam middle-finger in the air and yelling “suck it” at the top of my lungs every Monday night. It was an absolute blast of a time to be a wrestling fan, a time when things were so massively exciting and creative, when you never knew what was going to happen from one week to the next, and when some of the biggest, loudest and most legendary Superstars of all time were filling our TV screens. This set contains nine discs and almost twenty hours of Attitude, with all three volumes of WWE Attitude Era, the DVD sets that have been released over the past few years. Oh, what a release this is.

This is the ultimate love letter to an era that means so much to so many fans of this sport we hold so dear. This set has an absolute ton of material from this time period, and to talk about ALL of it here would take… well… almost twenty hours. There are the big bad brilliant moments featuring the famous rivalry between “Stone Cold” Steve Austin and his tyrannical boss, Mr. McMahon. There are moments showing the most wild and hilarious parts of D-Generation X and their run. The feud between The Undertaker and Kane is looked at many times. The development of Mick Foley into one of the most beloved Superstars of all time. The incredible tag-team action between teams like The Dudleys, The Hardys and Edge & Christian. It goes on and on and on. Heck, it even features some of the lesser known or more unusual parts of the era, like GTV and The Brawl For All.

I had so much fun revisiting all of these moments and matches. The documentary is full of funny scenes and entertaining interviews with a range of talent who worked during this timeframe. It just never gets old, and with the amount of mega-stars to watch, and moments like the “Stone Cold” beer bath, Stephanie McMahon aligning herself with HHH, Sable powerbombing Marc Mero, The Brood walking through flames, The Rock becoming “The Corporate Champ”, D-X mocking The Nation of Domination while dressing as them, and SO much more, this is pretty much a who’s-who and what’s-what of The Attitude Era, packed with content that will appeal to fans who watched it originally and those who may be discovering some of this stuff for the very first time.

To look deeper into the set, each of the volumes offers a real variety. Volume 1, disc 1, features a quick yet engaging documentary, like I mentioned earlier, which is a treat and goes by in a flash. The remainder of that volume is basically an assortment of matches and moments. Some standouts include Mike Tyson joining DX, Triple H taking control of DX as leader in a promo from March of 1998 which remains one of my favourite wrestling promos of all time, and matches such as an entertaining four-corner tag match between Austin and The Undertaker, Kane and Mankind, The New Age Outlaws and The Rock and D’lo Brown, over the WWF Tag Belts, which featured a wild crowd who were popping for just about everyone in the match. The first volume alone is worth the price of admission, but this is just the start.

Volume 2 is more of a compilation style set, without a documentary, which I liked. Hosted by Michael Cole, this features more of that crazy, brash, nostalgic insanity that made The Attitude Era so memorable and iconic. Some exciting and fun matches featuring guys like Owen Hart, The Rock, Steve Austin, Ken Shamrock, Shawn Michaels and X-Pac feature, and I had fun going back and watching them, including the memorable Austin versus McMahon match from RAW which would help launch WWE into an even bigger place. There are also many of those “moments” we think about when we recall this era, from “Sexual Chocolate” to The Godfather, to the rise of Lita and promos from the best of the time, it’s endlessly fantastic stuff and made me remember just how much I adored watching RAW during this period.

Volume 3 is a bit different, with the idea of it being “unreleased” matches that haven’t really been seen before. I liked this idea, because it meant I could watch a bunch of stuff I knew and loved, and end things with a bunch of stuff I hadn’t seen. Steve Austin against Bret Hart is a smashing clash, as well as Mick Foley against The Undertaker, and many more bouts that took me by surprise. Some of these matches were between guys who would later go on to have incredible and memorable feuds in WWE. It’s very cool that this volume exists, and it offers something really unique to this set overall, a nice ending to what is an incredible release.

The Attitude Era was a time where characters were vital to the presentation, where each week there was something unexpected and wild going on. The crowds were blistering in their reactions, too, and seeing all those crowd signs and hearing the responses when theme music hits is still goosebump inducing. I have so many fond memories of the 90s and early 00s, and while I’m still a big fan of WWE today, I do enjoy going back in time with sets like this and watching some of my favourite stars again. Whether it’s Steve Austin hitting everybody and their brother with a Stone Cold Stunner, or seeing Mick Foley put his body on the line for our entertainment, or watching Mr. McMahon attempted to squash the dreams of his Superstars only to be thwarted in the end. I love this period of pro-wrestling, and this DVD set highlights so many of the things I love about it. For the price, this is a steal, and you simply can’t go wrong. Un-be-lievable! 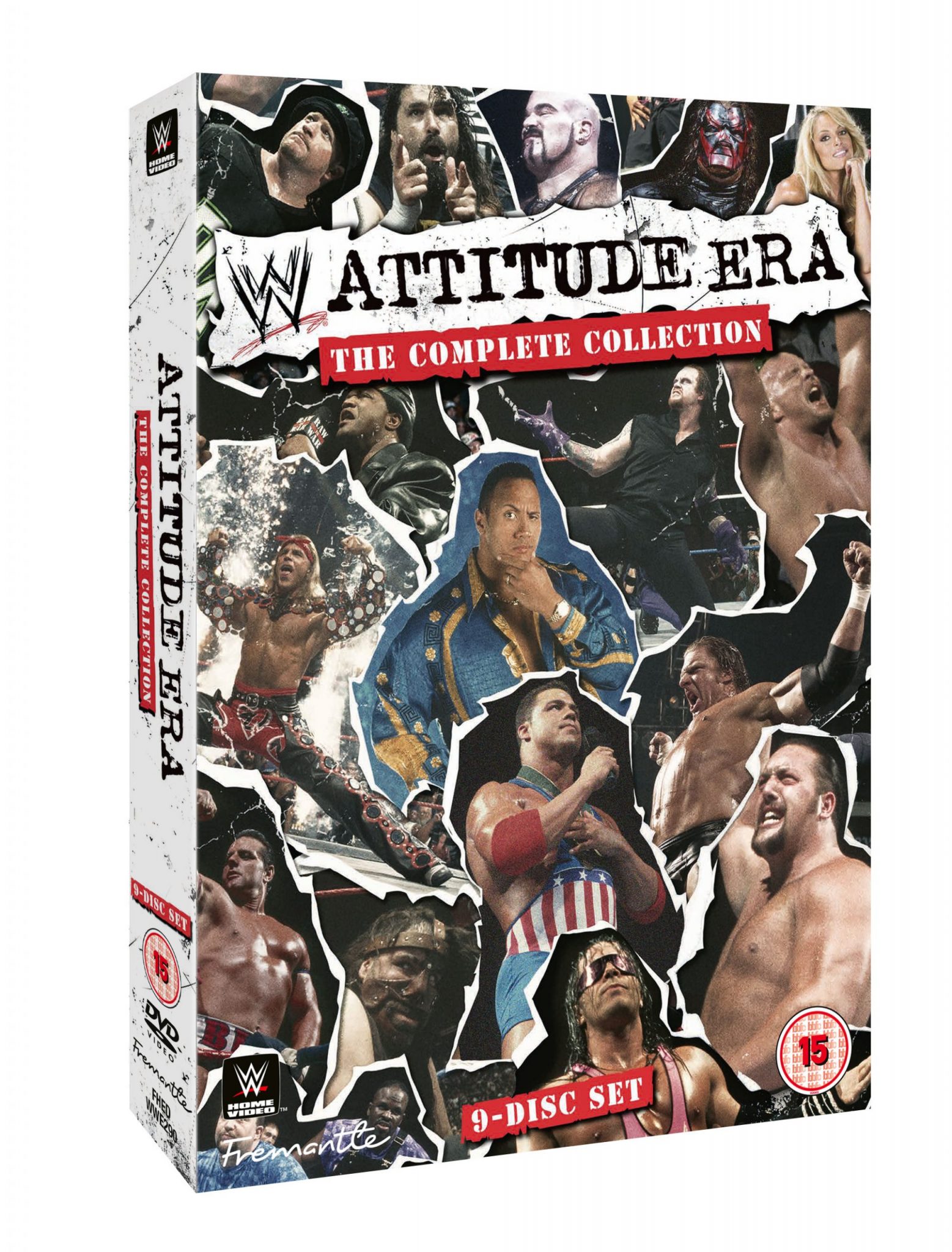 Are you ready? Then give me a “hell yeah!” Bust out your Austin 3:16 shirt, strike a 5-second pose and heat up a delicious slice of pie as you relive one of the greatest periods in sports-entertainment history with WWE Attitude Era – The Complete Collection!

Go back to the days of dysfunction, disorder and defiance when radical antiheroes ditched saying their prayers and taking their vitamins for opening up a can of whoop ass and laying the SmackDown!