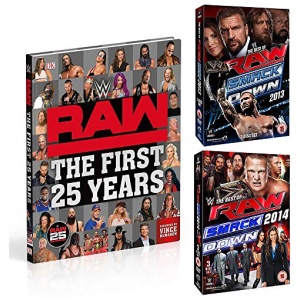 Only 3 left in stock

Best of RAW & Smackdown 2013: WWE’S landmark 50th year of Sports Entertainment proved to be one of the greatest in its illustrious history. A year that began with The Great One’s return for one last championship run concluded with WWE’s most prestigious prizes hanging in the balance awaiting the ascension of a true Champion of Champions. Along the way, a scrappy, bearded underdog challenged the status quo and captured the hearts of the WWE Universe, much to the chagrin of the malicious Authority, An evil genius concocted a new stable of minions, a giant faced an uphill battle for respect, and several new faces burst onto the scene looking to leave their mark in WWE. Relive all this and more as WWE presents The Best of Raw and SmackDown 2013. Best of RAW & Smackdown 2014: 2014 Was Absolutely Epic! Relive a thrilling and exciting year of sports-entertainment with WWE’s Best of RAW and SmackDown 2014! Featuring the rise of Daniel Bryan as he took on The Aut First 25 Years of Raw Hardback Book: This action-packed anniversary edition covers 25 years of WWE’s flagship entertainment event – RAW. Amazing photography and fascinating text document all the highlights of the show. Relive the show-stopping moment when WWE RAW invades WCW’s Monday Nitro. Experience Stone Cold Steve Austin’s incredible beer truck stunt. Read about the celebrated formations and reunions of D-Generation X; Chris Jericho’s shocking debut; and the emotional retirements of stars such as Ric Flair, Shawn Michaels, and Edge. From the very first show in January 1993 through to January 2018, all the memorable moments, key matches, and shocking plot twists of RAW are faithfully recorded in WWE RAW The First 25 Years. Engaging text and incredible photography from WWE’s archives including action shots, Superstar portraits, posters, and other memorabilia take the reader on a trip through RAW’s history. This comprehensive guide is a must-buy for RAW fans old and new. TM & 2017 WWE. All Rights Reserved.